Top Posts
Who Is Mohammed Kola Balogun?
eNaira: What is the Fate of the Nigerian...
eNaira: Nigeria’s Digital Awakening?
eNaira: Get Started with Africa’s First Digital Currency
End SARS Memorial 2021: We Must Remember Every...
Nigeria Decides 2023: The Crucifixion of Abubakar Bukola...
Bitcoin Reaches A New High of $60,000, Closing...
Why It Is Important For Employees and Entrepreneurs...
Does Driving an Electric Car Save You Money?
Top 5 Travel Destinations In Africa
Home Crime & Investigation How Convicted Criminal Thankgod Ebhos Escaped Death By Hanging In 2013 In Edo State Nigeria
Crime & InvestigationEditor's PicksLegalNigeriaUncategorized

This is the story of a man who narrowly escaped death after spending 19 years on death row for an armed robbery charge that took place in 1988 and was convicted by a military tribunal in Kaduna state in 1995. Thankgod Ebhos who was 54 years old at the time of his lucky release in 2014, watched the execution of four other inmates who were hanged and was told that he was next by prison officials in Benin, Edo state who took him to the gallows and forced him to witness the execution. Luckily for Thankgod, at the time of his own execution in 2013, the prison officials realized that his sentence was to be carried out by firing squad which they were not prepared for. 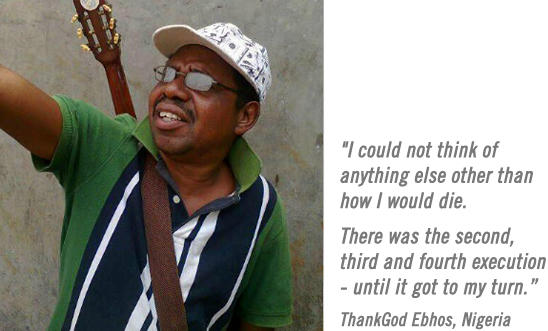 Following the failed execution, some human rights lawyers filed a notice of appeal stating that he had been imprisoned while the country was under a dishonourable military dictatorship under General Sani Abacha, associated with unfair hearings and persecuting confessions from prisoners. A court of the Economic Community of West African States (ECOWAS) in June 2014 upheld its ruling to grant an injunction to restrain the government from executing Thankgod, prompting the then Kaduna state Governor, Ramalan Yero to order his release from death row alongside nine other prisoners in exercise of his power of Prerogative of Mercy and in commemoration of Nigeria’s 54th Independence Day celebration. One could say that the ex-death row inmate would appreciate the true meaning of his name through his ordeal and triumph.

4 “Low-key” Nigerian Billionaires You Have Probably Never Heard Of

Is Nigeria Topping the List of the World Most Impoverished States?

Africa: The Most ‘Ready-For-Circularity’ Continent?

Who Is Nigerian Billionaire Chief Bode Akindele? What...

Revealed! The Networth Of Pastor Enoch Adeboye As...

Who Is Nigerian Leader Frederick Fasehun? What Were...