US Pulls Out Of United Nations Human Rights Council

The decision is welcomed by Israel but condemned by human rights organisations around the world.

The United States has announced it is withdrawing from the United Nations Human Rights Council. 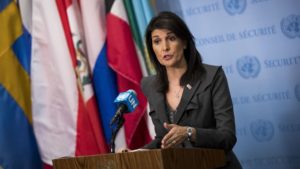 Nikki Haley is the US ambassador to the United Nations

UN ambassador Nikki Haley made the announcement in a speech on Tuesday, calling the body “an organisation not worthy of its name” and a “cesspool of political bias”.

The US has accused the UN Human Rights Council of hypocrisy and “chronic bias” against Israel and has taken exception to China, Cuba and Venezuela, which have been accused of human rights violations, occupying seats.

Speaking with Ms Haley, secretary of state Mike Pompeo said the UN had “become an exercise in shameless hypocrisy, with some of the world’s worst human rights abuses going ignored”.The US itself is not immune to accusations of human rights abuses and the timing of the withdrawal is conspicuous.

On Monday, UN human rights chief Zeid Ra’ad Al Hussein weighed in on the policy of separating child migrants from their parents and detaining them at the southern US border.”The thought that any state would seek to deter parents by inflicting such abuse on children is unconscionable,” he said.

United Nations Secretary-General Antonio Guterres voiced his regret at the decision and said he would “have much preferred” the US to stay.

“The UN’s human rights architecture plays a very important role in the promotion and protection of human rights worldwide,” he said.

The announcement makes good on past threats to leave the council, which is tasked with promoting and protecting human rights globally.

Ms Haley last year said the US would only remain in the body if “essential reforms were achieved”, and made clear on Tuesday that she did not regard sufficient changes as having been made.

Donald Trump has made distrust of international bodies and the threat to leave them part of his campaigning and said in September that US contributions to the body were “unfair”.

Israel’s prime minister welcomed the announcement, calling it a “courageous decision against the hypocrisy and the lies of the so-called UN Human Rights Council”.

“The US has been threatening to walk away from the Human Rights Council ever since President Trump came into office, so this decision comes as no surprise,” Kenneth Roth, the executive director of Human Rights Watch, said.

“President Trump has decided that ‘America First’ means ignoring the suffering of civilians in Syria and ethnic minorities in Myanmar at the United Nations.”

“We’ve made no secret of the fact that the UK wants to see reform of the Human Rights Council, but we are committed to working to strengthen the council from within.

Who Is German Gunther Nooke? Why Does He...

Who is Aishah Ahmad? How Does She Serve...

Top 5 Most Populous Cities In Africa

Who Is Buba Galadima? Why Was He Arrested...