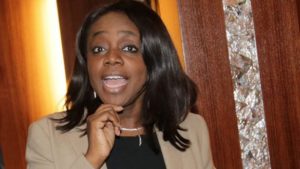 In September 2018, after months of intense pressure from citizens and opponents, Nigeria’s Minister of Finance, Kemi Adeosun, resigned from her position and flew out of the country, to the UNited Kingdom. Why did she resign? What caused the pressure? It was reported in early 2018, that Kemi Adeosun had criminally forged her National Youth Service Corps certificate, a program that is mandatory for all Nigerian graduated. Most Nigerian leaders will never resign, regardless. Many say it took them years of turmoil to attain their positions and thus they hold on through sweat, blood and broken bones. Therefore, Kemi Adeosun’s resignation can be regarded as a high level decision of integrity and a very wise move. Kemi Adeosun personally tendered her resignation letter to the president and Zainab Ahmed has already been appointed by the President as the acting Minister of Finance.

Kemi Adeosun was appointed by Nigeria’s President in 2015 to manage the finances of Africa’s biggest economy. Her flagship policy was a bid to improve tax collection and shore up the country’s finances by cracking down on mismanagement by government agencies. It is said that she indeed made some positive progress in terms of ensuring full implementation of the Treasury Single Account (TSA), the Whistle-blower Policy, the Voluntary Assets and Income Declaration Scheme (VAIDS), the improvement of tax revenues and blocking leakages and especially the exposure of thousands of ‘ghost workers’ on the government’s payroll.

In her resignation letter, Kemi Adeosun claims she legally paid for the Official document considering her age as at when she relocated to Nigeria. Kemi should never have been appointed minister of Finance if the government agencies had followed all necessary processes to verify every candidate for office.

There should be a solution to counter this kind of loopholes in the future. My question still remains “What would be Kemi Adeosun’s next move in the game of Nigerian politics?”

Top 3 Most Expensive Medication In The World

Africa’s Best: Top 5 African Countries With The Most Successful Entrepreneurs

Who is Larry Ellison? Top 3 Most Powerful...

Who Is Lateef Jakande? Facts, Life And Achievements

Press Release: “Nigeria Is Going To Be The...

I think this is one of such a lot significant
info for me. And i’m happy studying your article.

Appreciation to my father who told me about this blog.

[…] with Tunde Fowler at FIRS, Aisha Ahmad, Nigeria’s new acting minister of finance (since Kemi Adeosun resigned) made the following remarks to all in attendance at the […]