The cultures in Africa are diverse and heterogeneous consisting of a mixture of countries with various tribes that each have their own unique characteristic from the continent of Africa. This is as a result of the diverse populations that today inhabit the continent of Africa. African culture is expressed in its arts and crafts, folklore and religion, cuisine, music and languages.

Kente is a silk and cotton fabric made of interwoven cloth strips. The cloth was a sacred and royal cloth worn only in times of importance and was the cloth of Kings. It is an icon of African cultural heritage currently worn around the world and is easily identified by its dazzling multicolored pattern of bright colors. Every color on this beautiful fabric has a meaning. Every color is a symbol of events related to the daily lives of the people.

The talking drum is an hour-glass musical instrument which originated from the Yoruba tribe in Nigeria. The drum Pitch can be regulated to mimic the tone of human speech. It has two drum-heads that are connected by leather tension cords, which allow the player to modulate the pitch of the drum by squeezing the cords between their arm and body. A skilled player is able to play whole phrases. This instrument  has been adopted by popular artists all over the world, including Janet Jackson. 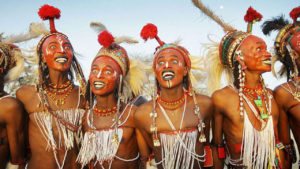 The Sharo cultural festival demonstrates the test of endurance and bravery in a most dramatic way. It is celebrated by the Fulfude speaking nomads, commonly called the Fulani and found along the northern parts of the countries that make up West Africa, spreading from Nigeria to Senegal. It is a major event usually held twice a year within the settlements. The main attraction is the raw display of endurance. Sharo happens when two young men want to marry the same woman to compete for her hand, they beat one another up. The men must suppress any signs of pain and the one who takes the beating without showing signs of pain can take the wife.

Unemployment: The Most Overlooked Threat to National Security and Development

Who is Mark Essien? Developer Who Sold Software...

Top 5 Most Humble Billionaires In Nigeria