Who Is Dapo Apara Of Alpha Beta Consulting Nigeria? Why Did He Reveal Former Governor Tinubu’s Leadership Scam Of Over 160 Billion Naira?

Mr Dapo Apara was the Managing Director/Chief Executive Officer of Alpha Beta Consulting,  said to be owned by former Lagos State Governor, Asiwaju Bola Tinubu and has been the Internally Generated Revenue Consultants (IGR) to Lagos State since 2002 under Tinubu’s government and Babatunde Fowler as the Chief Executive Officer/Executive Chairman of the Lagos State Board of Internal Revenue from 2005 to 2014. In July 2018, Mr Apara filed a 100 billion Naira petition to the EFCC against Alpha Beta Consulting via a law firm known as Adetunji Shoyoye and Associates, stating that the company has been running as a front for massive corruption of government officials fraud, money laundering and tax evasion. 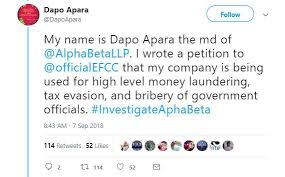 Despite the pressure and threats against his life resulting from the whistleblowing, Mr Apara took it upon himself to publicly expose the massive illegal activities of the company which has been under the protection of certain powerful politicians particularly in the Lagos state government, which has made it untouchable for many years. He alleged that the corrupt company has been collecting about 10% of the Lagos state revenue for its services and has generated IGR of about N1.5trillion excluding faac and loans. According to Mr Apara, his decision to expose the company’s illicit affairs was driven by his belief in the fact that the government of President Muhammadu Buhari is keen on fighting corruption, which has been the bane of Nigeria.  However, he claimed that his own share of profits as a 30% shareholder of the company has also been laundered by the current officials of Alpha Beta consulting, begs to wonder the real reason behind his whistleblowing.

He didn’t just expose the corrupt dealings of the company by word of mouth but exposed some documentary evidence to prove his allegations and debunk sources in the company who are trying to deny the allegations. He has called on the EFCC to take immediate action as well as victims of the corrupt activities of the company to join him in the fight for justice. He further alleged that Ocean Trust Limited is another company being used by Alpha Beta Consulting to perpetrate money laundering.

Mr Apara also claims to have more evidence and has expressed his readiness to provide them to the EFCC once it confirms the petition and begins its official investigation of the company. However, the EFCC through its spokesman has promised to put the petition into consideration. This whole scandal has definitely put a huge strain on Tinubu’s political agendas and the political circle of the Lagos state government.

Top 3 Most Expensive Medication In The World

Open Letter From Harold Doley To US Secretary...

What Are The Top 10 Major Export Companies...

5 Skills To Look For In A High-Performing...

Who Is Ismaila Isa Funtua?

[…] taxes due to the government. Even worse, taxes collected were heavily misappropriated for example, Dapo Apara revealed the significant tax scam hoovering over Bola Ahmed Tinubu’s Alpha Beta Con…. Ensuring successful businesses pay tax is a must. Ensuring the tax is used for the growth and […]