Top Posts
Customers’ Reviews on Popular Airlines
3 Major Airports In Nigeria That Need Effective...
10 Facts About The Mind-Blowing Salt Mine in...
Do You Know The Cave Restaurant In Italy?...
Who is The 22 Year Old Inaugural Poet,...
The African Continental Free Trade Area (AfCFTA): Future...
Top 3 Best Universities In Africa 2021
Most Secluded Nigerian Culture: Who Are The Kambari...
4 Ways To Maintain Small And Medium Enterprises’...
Top 3 Attractions To Visit On The Lagos...
Home Life Style Who Gifted Pastor Chris Oyakhilome A Private Jet?
Life StyleNigeriaQuestion SeriesReligion

A research was conducted by the Washington-based Pew Forum on Religion and Public Life, according to this research,  Africans are among the most religious people on earth. The research titled Tension and Tolerance: Islam and Christianity in Sub-Saharan Africa were situated on over 25,000 interviews conducted in more than 60 languages in 19 countries. The study proves that at least half of all Christians in Sub-Saharan Africa believe Jesus will return in their lifetime. One in three Muslims in the region expects to see the re-establishment of the Caliphate. 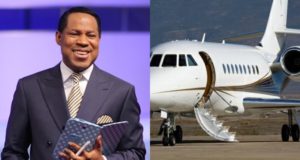 There are at least 89 million Christians in Nigeria, and Pastors collect 10% of their income. Just imagine the total amount they get every week and that does not include the seeds they compel their congregation to sow using God’s name as a foil. They do not build free schools with this money nor do they provide affordable healthcare. The average church member cannot afford the private schools these churches have established. But we see them drive exotic cars, live in a lavish mansion and wear super expensive accessories.

This brings us to the question of who gifted Pastor Chris Oyakhilome who already owns a private jet another one?

The Jet was given by the Loveworld Music and Art group, an arm of the Believers Loveworld Ministry (aka Christ Embassy) trained by him to produce gospel tunes. His gift was presented to him at the Loveworld Convocation Arena (LCA) to close the week-long International Pastors and Partners Conference (IPPC) held on the 19th of November, 2017 in Lagos, Nigeria. It is worthy to note that Pastor Chris is one of the richest Pastors in Africa.

This happened in Nigeria the world’s poverty capital. Africa really does has a long way to go, the people (Africans) need to start thinking logically, they need to stop ascribing everything to God and start asking critical questions about the fundamental presuppositions of religion. Only then can we move forward as a continent.

Jim Ovia’s Africa Rise And Shine: How a Nigerian Entrepreneur from Humble Beginnings Grew a Business to $16 Billion

What Are The Top 3 Fastest Growing Industries...

Top 3 Most Profitable Industries In Nigeria

Who Is Macky Sall? Top 3 Achievements He...

Who Is Tonye Cole? Why Does He Want...

Who Is Rauf Aregbesola? Why Was He Criticized...

Why Nigeria Cannot Continue With A Covid-19 Lockdown

Who Is Emeka Offor? Why Are His Employees...

religion is a business In Africa

This has more to do with the people in general rather than the pastors, although they play a vital role. Nice write up. The concluding part is enlightening

If you criticize them, you are blasphemous. You should always obey and give to the “Shepherd tendering the sheep” What could you say to correct the system, the doggedness of the followers this day is extremely annoying and scary. I implore anyone who cares to study philosophy and phenomenology to know how to act right. It is not about the gift right now, It is about the mind set of the givers.

Yes we really need to wake up it nt getting funny anymore all in the name of God.

This is a great and eye opening write up. I’m moved by the concluding paragraph the writer wrote like NIETZSCHE

We are blinded by RELIGION AND POLITICS in this country . Your heart is what God sees not how much you spend , or if you sit in the front row in church and all that hypocrisy shit . You give all your Investments to pastors while your next door neighbor is starving , even your parents don’t have nice wears or good cars, people sleep under the bridge, most children are starving and wailing and no one to give them love, some people sit next to the garbage waiting for leftovers so they can feed . The first commandment is LOVE . Help the needy and watch God bless you. Wise up guys . “When I was hungry U gave me food , when I was cold U gave me clothes” etc .. you helping the poor is you making God happy .. Pastors are like holy teachers ( I guess ) they are to guide us to understanding the word of God they are not GOD . If you wanna make heaven help the less privileged, be the voice for the voiceless , pay your tithe cool, but that’s not a guarantee that you will make heaven … it’s the souls you heal that gives you the gate fee ….UR HEART IS ALL GOD SEES .. am not being judgmental just saying my mind … free thinker

I pray we all we stand to realise the different between POLITICS AND RELIGION….. All the anointed should always represent and work towards what they preach and should stop the habit of ” do what i say and not what i do”.

This is sad but true!
Nice write up

Religion is now a joke thanks to these naija pastors. It cant even pass for a legit business talkless of true spirituality. A full joke with clowns getting richer from uneducated poor people.

It’s so funny how religious we are in Nigeria, yet the crime rate is still very high… which means a good number of church “goers” are pretenders…I don’t understand the need for pastors to have so much worldy possessions. A private jet really? Who played for it..couldn’t that money be used to do something productive. How can somebody build a university that most of his church members cannot afford. This is corruption and wickedness being masked under “Religion” .

There is insufficient evidence to validate if there really is a God. However it appears perhaps there is a grand design.

What is certain though is that neither the Bible nor the Koran are the words of God or messages gotten from anywhere mysterious. They are the works of men.

The sooner we realize that and accept that our destinies are in our hands, the better for our society. As long as we continue to believe that the future is dependent on some other force or power elsewhere, then we will continue to enrich fraudsters and continue to live in misery.

Throw it all away.
Get and education and be productive