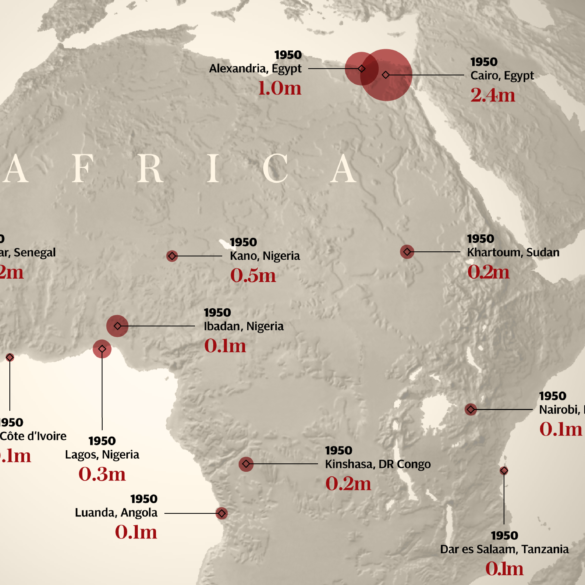 Africa’s population is increasing by the day,  its current population is 1.216 billion. By 2100, it will be home to about 4.4 billion people which is four times its current population, such an increase is more likely to pose significant challenges. Poverty, conflict, disease, and access to education are all issues African governments will continue to face, having to build states that can support ever-increasing amounts of people. Just as governments will have to cope with higher populations, greater levels of urbanization will also challenge countries in Africa as they seek to develop.

According to the United Nations; “The continent continues to suffer under very rapid urban growth accompanied by massive urban poverty and many other social problems. “These seem to indicate that the development trajectories followed by African nations since post-independence may not be able to deliver on the aspirations of broad-based human development and prosperity for all.” Africa is currently the world’s fastest-growing continent, with GDP expected to grow by at least six percent annually until 2023. However, while nations such as Nigeria, South Africa, and Egypt enjoy relative wealth, the continent is still home to three-quarters of the world’s poorest countries. The question then remains; Can Africa translate its huge population growth into economic development, and then invest this wealth to improve quality of life?

Despite the constant challenges, the massive population growth means rapid urbanization and it has been estimated that 864m more people will live in urban areas in 2050. While just over a third of Africans have lived in cities in 2010, 56.5 percent will be urban-dwellers by 2050. Africa once had just one megacity but is predicted to have three in 2025. In the same period, it is also predicted to go from having three cities with a five-million-plus population to twelve. Lagos is currently Africa’s largest megacity and has a population of 13 million, but this figure is said to soar by a further six million in the next 10 years.

The hope is that, through the provision of good housing for the poorer masses, keeping Africa’s growing cities healthy, educating Africa’s new generation, and strong collaboration between leaders and stakeholders in the further development of the continent, in the next 100 years Africa will be a place no one will want to ever leave.

Top 3 African Leaders That Were Imprisoned |...

US Government And United Nations Speak On Recent...

Is Nigeria Truly The Home Of The Poorest...