Top Posts
INFINOX Skyrockets to Half Trillion Trading Mark Amidst...
Who Is Abdulrasheed Bawa of Nigeria’s Economic and...
Cameroon’s Tradex inaugurates its first service station in...
NaturalShrimp USA Signs Letter of Intent to Acquire...
African Development Bank debars Global Interjapan (Kenya) Limited...
Saya International Corporation Announces Appointment Of Olatorera Oniru...
Famous Adire Brands And Where You Can Find...
Who Is Mohammed Mijindadi? Appointed 2021 As President...
Who Is Lateef Jakande? Facts, Life And Achievements
5 Amazing Traditional Outfits Around The World
Home Africa Who Is Babajide Sanwoolu?
AfricaLeadershipLegalNigeriaPoliticsUncategorized

Who Is Babajide Sanwoolu?

Babajide Sanwoolu, the current managing director of Lagos State Property Development Corporation (LSPDC), is a Former Lagos State Commissioner for Commerce and Industry who has joined the governorship race of the state against the sitting governor, Akinwunmi Ambode. He is seen as the biggest threat and roadblock to Ambode’s chance at re-election as he allegedly has the backing and support of Tinubu and 50 other APC leaders. 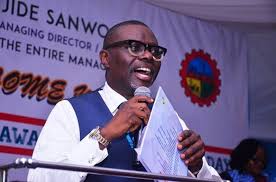 It has been alleged that 50 council chairmen loyal to Ahmed Bola Tinubu, have met and pledged their support for Jide Sanyaolu Sanwoolu, following Tinubu’s declaration of support for him as his preferred candidate.

5 Things Every New Entrepreneur Should Avoid

Nigeria, Under President Buhari Is A Failed State

Who Is Folorunso Folarin Coker Of Lagos State...

Why Was Lebanese Talal Ahmed Roda Sentenced To...

Who Are The Top 6 Foreign Donors Contributing...

Who Is German Gunther Nooke? Why Does He...

From Dino Melaye and Ayo Fayose, To? As Nigeria Moves Away From Bad Leadership, What Does The Future Hold From 2019? - Olatorera Consultancy Limited October 20, 2018 - 9:00 pm

[…] Olusola Sanwo-olu (BOS) in November 2018 visited the palace of his majesty, Oba Oniru. (Read: Who Is Babajide Sanwoolu?) In attendance at the event were the APC Governor of Lagos elect, Babajide Sanwo-olu, APC Deputy […]